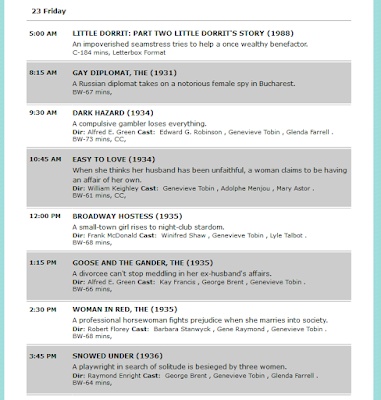 I was sitting at the computer momentarily bemoaning this year's Summer Under the Stars schedule on TCM-- wouldn't it be cool if they did a Genevieve Tobin day? Hell, I'd enjoy it, but I don't suppose that would surprise you.

As if pulling my thoughts from the distant void, the TCM programmers randomly decided to showcase 7 of her films on Friday, October 23rd. I think it's part of their month-long look at women in film, but I'm not sure at this point.

Either way, exciting news! And a good way to try and get a hold of more of her films!

Danny
Posted by Danny at 8:54 AM No comments: 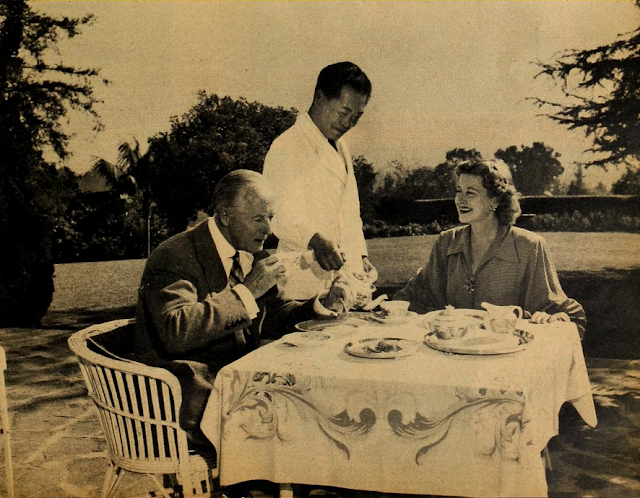 I've only really started to research Genevieve Tobin's life, and I'm already starting trying to figure out why. Don't get me wrong, I'm doing it because I want to do it. But what do I hope to learn from this? What is the narrative of this obscure woman's life?

Yesterday, I became fascinated with her marriage to William Keighley. Keighley is a character hard to read-- a stage actor turned film director from Philadelphia. He developed a British accent after working with a Shakespearean repertory company, and seems to have strived for much of his life for culture and class. This contrasted with the movies he's best remembered for, a number of typical Warner Brothers' films produced competently like Picture Snatcher, Dr. Monica, 'G' Men, and Each Dawn I Die.

Keighley also hosted Lux Radio Theatre from 1945 to 1955. I mention this because Radio Mirror featured a piece about him from April of 1945 called "I call him Keighley" -- a biographical piece written by none other than Genevieve Tobin.

I was pretty thrilled to find a piece that Tobin had written, and even more excited to see that it really touches on how and why she ended her career. You can read the piece if you want, and it contains a lot of interesting little bits.

There's a number of stories about Keighley that probably sounded a lot more romantic back then than they do now, such as telling his wife she was offered a part in a picture the same day it was beginning to shoot-- and while they were on an airplane.

There are a lot of other interesting details, too, such as Keighley and Tobin's around-the-world honeymoon in the late 30s. Interestingly, they stopped in Japan-- where I live-- and even visited the Buddha at Kamakura, which is pretty cool.

Anyway, just another piece to the puzzle.

Email ThisBlogThis!Share to TwitterShare to FacebookShare to Pinterest
Labels: Interview

Getting Hit in the Balls 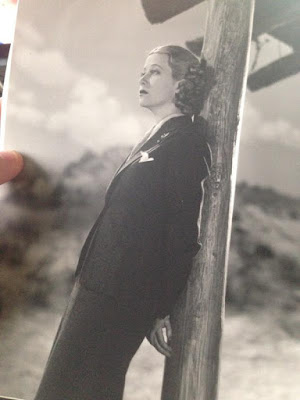 Bad news: my letter to Ms. Tobin's relative got sent back 'return to sender' unopened. There are still a couple of routes I could pursue there, but they'll have to wait. Just too much on my plate right now.

In the meantime, I bought a few stills from Jim Parrino's Mint during a sale. Really love their packaging, which is a thing I can say now as an adult. I also won a few other auctions, whose contents I will probably be sharing in the next few months.

Alright, so the blog has been up for two months and all I've done is buy shit. I think it may be getting time to get my butt into gear.

Danny
Posted by Danny at 3:21 AM No comments: