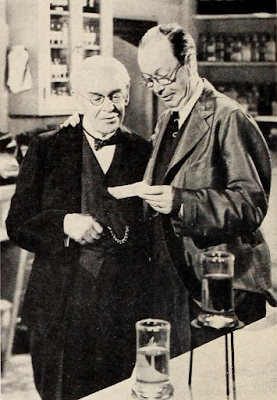 Our Neighbors, The Carters

"Wouldn't it be wonderful, daddy, if minutes were like years?"

This extremely obscure Paramount flick made a big mistake with that line right there, since it certainly echoes the film's own pace. Seeking to cash in on the popularity of Metro's Andy Hardy series and the other homegrown nostalgic family flicks that were raking up box office gold, Our Neighbors, The Carters is as twee as you can imagine. Cute kids? Check. Disability? Yeah. Proud family that sticks together? Yep. And everyone learning a valuable lesson about love and money and what it means to be a family?

Paramount, usually known for their extravagant films, usually with a European bent, really went in the other direction for this go around. Set in a provincial American town, the Carters-- with matriarch Fay Banter and grumpy but lovable father Frank Craven-- make due with what they have, which is tough with five kids. One also is disabled and needs braces, while the others have a variety of little dramas.

The big one that hit their family is when dad's drug store is driven out of business by a chain and then all of their money is lost trying to fight back. Dire financial times strike, and it may mean that they have to give up one of their children to a pair of rich friends in order to make ends meet. Yes, the Carters are too proud to take money-- but not too proud to sell one of their kids. This kind of movie didn't age very well-- it's pat on one hand, and contrived on the other. It's too sincere, punching every note at maximum resiliency.

The best part of the movie are pre-Code stalwarts Lowe and Tobin. Lowe has a good smile and charm, which makes his rich man character who apparently drinks every night (!) come off better than he probably should.

Tobin's penultimate role sees her full of mirth and light. She plays a distant friend of the Carters who realizes that she wants a kid as well, eventually leading to the whole entanglement with the Carter kids. Like Lowe, she's too bright and cheery for us to really believe them to be as dumb as the tripe they're saying. Tobin's best moment comes when her friend, Banter, has saved up for a specialist, though she doesn't have nearly enough money but doesn't know it. Tobin exchanges a wink with the doctor, letting the audience know that she made sure that Banter thinks she's the one taking care of everything while also tipping us off to her cleverness.

The movie was enough of a financial success that a sequel was considered, but it doesn't seem to have ever come to fruition. Paramount put this on a double bill with Too Many Husbands, a screwball comedy with Jean Arthur, Fred MacMurray, and Melvyn Douglas about a woman who really gets a kick out of the idea of having two husbands. So, ya know, perfect double feature material.

Our Neighbors, The Carters (notably, the title is another ingratiating tidbit-- their "the audience's" neighbors, no one in the films in particular) is a cheesy little production, one that doesn't convince and drags. It does speak to the old adage though-- families will always have happy endings as long as their friends are rich as all get out.

Frank S. Nugent in the New York Times surprisingly fawns over it, noting, "if the Carters can pull through, brother, so can you."

The Showman's Trade Review also loves it, calling it "down-to-earth" and praising the child actors.

The National Board of Review calls the characters "well delineated."

Harrison's Reports suggests that young folks should see it to understand the sacrifices their parents make. Yikes.


This is probably the most obscure movie I've covered on this site so far-- I had to watch it on a bootleg DVD at the UCLA Cinema Studies room (hence why there are no screenshots here). Maybe it will get released someday-- the transfer wasn't bad-- but I wouldn't hold your breath.
Posted by Danny at 11:08 PM No comments:

Email ThisBlogThis!Share to TwitterShare to FacebookShare to Pinterest
Labels: Reviews

This last weekend was the annual Turner Classic Movies Film Festival in Los Angeles. Thanks to the kind people at TCM who give me media credentials and an even kinder wife who lets me splurge on hotel, I got to attend for my second time.

Of course, the biggest treat was a showing of the Tobin-starring 1932 Fox flick Pleasure Cruise. I was the first in line, waiting for 2 hours for the showing. When Tobin popped up on screen I applauded heartily-- that's the kind of person who runs this site, naturally. It's only the second Tobin movie I've seen in the theater after a showing of One Hour With You in Shibuya, and the print was great. The movie went over well, which surprised me-- the whole spousal rape that caps the film's third act is still fucked up-- but it quickly faded to the background among many of the other events of the festival. Too bad-- Tobin's scene in the stateroom where she battles a picture of her husband in deciding whether to give in to his jealousy is still a hoot. 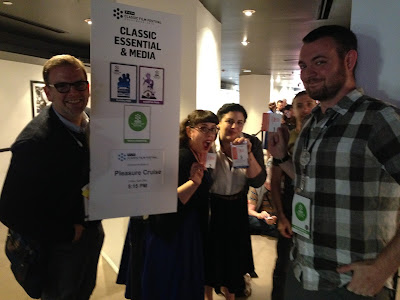 Fun side note: as part of the Festival's Boutique, there were several custom chocolates given the names of several of the films being shown. Pleasure Cruise's treat was a coconut and macadamia mix-- two of my least favorite things in the world. I still ate it though-- how often do you get to eat chocolates named after obscure 1930s films? Not often enough, I say.

I stayed a little extra time in Los Angeles to do some serious Tobin research-- the kind you can only do in Los Angeles. I only had three days to do it, so I tried a couple of different places to get a feel for the process.

Monday was the Margaret Herrick Library, the home of the Academy archives and a treasure trove of artifacts. Unfortunately, most of their archival material is centered around Tobin's eventual husband, director William Keighley. And while it's fun that I got to hold his Legion of Honor award in my hands (don't think the nation of France will be giving me one of those any time soon), it was a little frustrating in how little about Tobin I found. However, some fun notes:
And a fair bit more. I found a doctoral dissertation that Keighley contributed interviews to in the 1970s about the chautauqua circuit in the 1920s. The material on Tobin is still sketchy, but when I get to return next time, I'll be able to dig into the individual film files and get a better sense of her contribution to her movies.

The next day, at the gorgeous UCLA campus, I got to dive into their archives and watch two obscure Tobin films-- Seed and Our Neighbors, The Carters. Both were nothing to write home about-- Carters especially was a treacly mess-- but it was cool to actually see them.

The last day of my trip involved going to the Los Angeles Public Library and digging through their photo archives. Discoveries here included the first photo I'd seen of her with her grown brother, George Tobin. There were also a number of charming pictures of Tobin post-1940 where her age clearly showed. My favorite picture from the newspaper archives was one photo that circled Tobin's face and crossed out those of people also in the picture-- namely then-unknowns Van Heflin and Deborah Kerr.

I also learned that Tobin's house in 1933 was at 626 Lorraine Blvd in L.A. The house still stands, and is valued at only $3.5 million. Can you say Kickstarter?

Now I'm vacationing back in my home town in Illinois, where I concidentally found a paperback copy of The Case of the Lucky Legs-- yes, the basis for the Perry Mason film with Warren William where Tobin portrays Della Street-- and blasted through it.

If I learned anything, it's that I'll have to spend a good amount of well-planned time in Los Angeles. It won't be soon, but getting the chance to investigate all of this has been gratifying and exciting.
Posted by Danny at 10:36 PM No comments: